When David and I were newly weds it seemed like there was always someone wanting to look at our rings. When they would look at mine and notice the icthus, I would comment that David's matched mine and then they would look at his. Then, it seemed we were always telling the story of why we chose these rings. We have been married for 8 years now and I don't think I have told this story since Kirstyn was born and kids became more of the focal point when around friends. So today is your lucky day...

Now, I know you have seen this icthus before, probably on the back of some one's car. When I left home for college, I had been given one for my car but had not put it on my car because my driving didn't scream "Christ Like" all of the time. Well, when I moved into my very first apartment I had lots of plain white walls and no decorations. I was saving up to buy a couch so that my guests could have somewhere to sit other than on my bean bag.

One weekend when I was in Arkansas visiting my parents I showed my dad the icthus and we were talking about the meanings of each of the letters inside of the fish. I made the comment that it would be cool to have a big one of these to hang in my apartment and my dad said he would make me one. He drew it out on butcher paper and then onto a piece of sheet metal that he had in the garage and then proceeded to cut it out with a cutting torch. Pretty cool, huh. You can't tell in the picture but it is about 4 feet across...very dramatic. I have painted it a few times but I still love it and it hangs in our master bedroom.


Fast forward to David doing some ring shopping (we had been dating two years) and he walked into a jewelry store and happened to notice my wedding band with the two fish in the clearance case! He went ahead and bought it even before he had an engagement ring because he knew that I would love it. He was so right.


Now I know that you are wondering why I wear the channel ring on the outside of my wedding ring and engagement ring. The channel ring was actually my promise ring that David gave to me for my 21st Birthday (12/25). He later proposed on March 12, 2000. When he proposed he also showed me the wedding ring he had purchased for me. I took it and had his wedding ring custom made to match mine. He promised me a second channel ring for the set for our 10th anniversary. 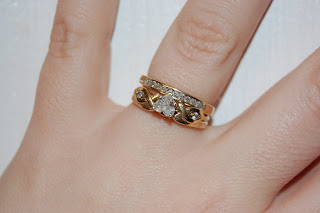 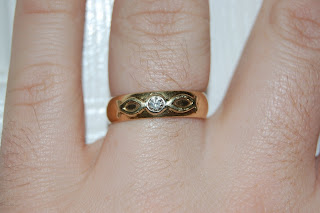 Now are you wondering what the letters all mean?


During the early days of Christianity, Christians were often put to death for practicing their faith, so they worshiped in secret places. A fish painted on the outside door of a house let other Christians know that they would be safe and welcome inside.


Come back tomorrow to hear about where and how David proposed!

Oh and if you know me in real life, please don't ask right now too look at my rings. My wedding set is a size 10 and yesterday I tried on my MIL's size 4.5 ring and it fit. Needless to say, apparently losing 70 lbs has a dramatic effect on ring size. I want to get them sized down to fit me again but I am waiting until I get to my goal weight. That will be my non-food reward...so don't forget to stop by on Fridays and cheer me on to losing this last 20 lbs!

And definitely qualifies for Wordful Wednesday!

I didn't know what the letter meant inside the "fish". I'm so glad you posted this. AND wow. From a size 10 to a 4.5? That's CRAZY small. I had to get my rings resized this year too. But we are talking a size and a half, not more than half the total size. Way to go!

that was a very lovely story!

That is a beautiful story!
(And congrats of losing 70 lbs. Wow!)

I loved the story and your weight loss success is wonderful!

Beautiful!!!! I loved reading your entry.

My W W is about a family movie I just watched again, and found something in it that I'd never seen before...can you see what I saw? Come on over for a visit...happy Wednesday wishes to you.

I love your story Natalie! And one of the best parts is that they are tooo big because of your great weight loss success!! Very pretty rings and awesome meaning!

What a great story about your rings! They are so cool. I had my ring redone two years ago and I wonder if I even have a picture of it in its original state. Congrats on the weight loss!

i love it!! :) rings should be more than just pretty jewelry. you got both! :D

I have the sae Non food reward too...and I am at goal, but still haven't gotten my ring sized down. It is my most favorite ring that I got for Mother's day one year and it is my birthstone, love it.

THat is a great story about your rings and they are SO nice. Can't wait to hear more!

What a beautiful story, Natalie! I love your giant icthus, too.

I had never heard the story behind your rings before. Very cool! Thanks for sharing it with us. That is so neat that your Dad made that for you and that it kind of started it all...

Those are gorgeous rings!!

what a precious memory. I am really glad that you shared it. Your rings are beautiful!

So sweet! Your rings are beautiful, so is your story!

That is so neat Natalie! I have seen those fish on cars but I have to admit, while I knew they signified Christianity in some way, I had no idea of the deeper meaning. And the ones I have seen say Jesus rather than the letters you show...thanks for the lesson :)

And of course your rings don't fit! That will be wonderful when you reach your goal weight to have the resized! GO YOU!

That is an awesome story and what beautiful rings you have. SO individual. Oh and congrats on the weight loss - I had to have my rings resized last year too. Isn't it a GREAT feeling?

I love this. It truly portrays how Christ is the center of your lives and your marriage and how you want to live your married lives in a way that reflects Christ. What an awesome testimony and foundation.
Looking forward to the next post!

Love the rings and wall hanging!

Loved your story-my diamond is heart shaped too. I love it!

Those are gorgeous and meaningful rings! Congrats on the weight loss; I've recently begun that journey myself.

That was such an awesome little insight into your love. Thanks for sharing. Swing by my site to read my story too!

Love the rings--so beautiful and unique! And you've lost 70 pounds?! Wow!!! That is awesome!

That is a wonderful story!! I too, can't seem to put one of those fishes on my car, because of my driving.

This is great. I'm so glad I stopped by! :) I really like your blog design too. It's so colorful!

Your story is so sweet and your rings so beautiful! Love them!

Nice to meet you, also! What part of Arkansas are you from? Thanks for the blog visit.

I agree...truly beautiful story and rings.

Love the story and the rings! And to tell ya the truth, I put a fish on my car BECAUSE I was not a Christlike driver. It reminds me to be nice! I have something BIG to represent after all. And it has seriously stopped me from saying (and gesturing) some not very nice things!!!

Isn't it interesting how we lose weight! My wedding rings are a size 10 and I could maybe go down a size. And I wore them 100 lbs heavier too.

Very cool post - I love the story! I also wanted to congratulate you on losing 70 pounds... what a great accomplishment!

I've lost 92 in about 14 months, and too have issues with my rings... I have to wear my wedding ring on my middle finger. No one really seems to notice though!

Wow, I never knew what the letters inside the fish meant. Thanks for sharing that and your sweet story.

Congrats on losing the 70lbs! That is awesome! I'm struggling to get started with my new plan so I'm curious...how did you do it?

Thanks for visiting my blog. Looking forward to meeting you on the 28th!

Neat story... great job on the 70 pounds. Good luck with the rest of you goal.