This post just had to happen for a few reasons.  First, the reason that I started this blog was so that when my grandparents were traveling in their motor home either to Alaska or to south Texas my Granny Rene could visit the local library and ask the librarian to pull up my blog address and she could scroll through all of the pictures and stories about our new baby Kirstyn that I had posted that week or in the past few weeks since she had last had a chance to look.  This was all before I knew there was a blogging community or before I even had social media.  The other big reason I wanted to post was to share the words that Pastor Josh Herweck spoke at her memorial so that family and friends that missed the service could read them and enjoy the memories too.  He sat down with several of us a few nights before and did a really great job putting together our memories of her.

7 Where shall I go from your Spirit?

Or where shall I flee from your presence?

8 If I ascend to heaven, you are there!

If I make my bed in Sheol, you are there!

9 If I take the wings of the morning

and dwell in the uttermost parts of the sea,

10 even there your hand shall lead me,

and your right hand shall hold me.

11 If I say, “Surely the darkness shall cover me,

and the light about me be night,”

12 even the darkness is not dark to you;

the night is bright as the day,

for darkness is as light with you. 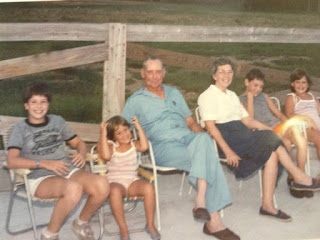 Irene and her husband bought a chainsaw shop in the late 50s. He fixed the chainsaws, while she did the books. Then they bought the Western Auto Parts Store.

Her husband loved country music, particularly John Denver. He would get up in the morning and crank up the radio in the kitchen, but when she came in she would immediately turn it down.

And then when Paul Harvey came on, everyone had to be quiet so that they could be sure to hear, “the rest of the story.”

She love her flowers and feeding the birds, but she would chase off the squirrels and crows that would try to eat her bird seed.

When she was younger, in high school, she liked photography, since she moved around a lot, it provided memories and stability.

She loved cemeteries and was very interested in how well they were kept up.

She loved history and knew it well, especially the presidents, states, and random facts about each.

She won the “most experienced mother” each Mother’s Day at church, even causing people to question Deborah’s age when it was really Michael who was older.

Being in a small town, she was, also, very interested to know everyone’s business not to be gossipy, but because she genuinely cared about everyone.

“He has told you, O man, what is good; and what does the Lord require of you but to do justice, and to love kindness, and to walk humbly with your God?”

She had a heart-attack in ’87, and the doctor planned to do an angioplasty. So, before the procedure she wrote the grandkids letters about how special they were. After the surgery, she became very serious about a healthier diet. She ate oats with raisins every morning, and when she made hamburgers for everybody else she would make a salad for herself from the fixin’s. She even started taking fish oil before it was odorless.

She, also, began taking some incredibly long walks. On one of her walks she swore that she saw something big and fuzzy, saying even just a few weeks ago, “I don’t know what it was, but I am not going back down there, again.”

1  God is our refuge and strength,

a very present help in trouble.

2  Therefore we will not fear though the earth gives way,

though the mountains be moved into the heart of the sea,

3  though its waters roar and foam,

though the mountains tremble at its swelling.

22 Cast your burden on the Lord,

And he will sustain you

She loved the Lord, and actually came to know the Lord as an adult. She and her husband were living in Texarkana, and someone came to their door inviting them to church at Moore’s Lane. They ended up believing in Jesus and her kids remember watching them both get baptized.

She loved her church. She work with the Sunbeams, which were the younger versions of GA’s and RA’s.

She was the WMU director and would frequently host missionaries in her home who came to town.

She intently studied her Bible and knew it incredibly well. She would quote Proverbs frequently. She taught Adult Sunday School, and the ladies loved her as a teacher.

When asked what her favorite scripture was, she would say, “Oh, I just love it all.”

(God) is able to do far more abundantly than all that we ask or think, according to the power at work within us,

She would watch over duck eggs, keeping them from squirrels when the ducks would go down to the pond.

She would wash newspaper and hang it up to dry so that the newsprint wouldn’t get all over her canning jars. She, also, washed and reused foil for baked potatoes. She would wash cereal bags for cooking.

She loved decorating anything that could be decorated, even decorating with fresh tree clippings, like cedar. She would fold, cur, and make boxes and ornaments out of Christmas cards.

She dedicated special time with Meredith and Neida for decorating a doll house.

She had very pretty handwriting.

She enjoyed watching Murder She Wrote and Matlock, but when Golden Girls came on she would send the grandkids to bed, because that was too inappropriate for them.

She would, also, make sun tea. And she made popcorn, because Sunday Supper was for popcorn and ice cream. She made home-made ice cream, vanilla and sometimes butterfinger. She did like her sweets.

After retirement, they would take their motorhome on the road for months all the way up to Alaska visiting friends along the way. And nothing better have gotten in the way of their trip each year. They even left one of their grandkids’ wedding before the bride and groom, so that they could get going on their trip, but they always made sure to mail post cards back while they were gone.

In Alaska, he would fish, and she would can the salmon. One time they decided to ship the fish him, but it didn’t arrive on time and was especially ripe when they opened the package.

She loved her whole family.

She once chased Mark wielding a yard stick like a baseball bat, because he had made Meredith cry.

She kept the grandkids every Friday night and would cook the hamburgers and iron-skillet-prepared smothered fried potatoes on Saturdays.

She made a “worm-bed” from potato skins and coffee grounds for the grandkids to use while fishing.

She let the grandkids turn the furniture upside down and build forts and shoot each other with rubber bands.

She would sit with her grandkids on the second pew in church and would drive them home after church on Wednesday nights. On those Wednesday evenings home they would sometimes stop off at 7-11 for Icees where she would send the kids in to pay for their own treats while she waited in the car.

Some Mondays she would pick up some of the grandkids, make them spaghetti and put them to bed.

She taught grandkids to drive each somewhere around the age of 9. They would have to bring pillows and phonebooks to sit on to see over the dash.

She made this super sweet grape kool-aide, and unbeknownst to her, her husband would come by when she wasn’t looking and dump in another cup of sugar. The grandkids would drink so much that they would end up watering the field with their throw up.

One time, when little baby Jessica McClure fell in that well in Texas, Irene became very concerned about a well that they had. So, she had the grandkids start collecting rock in order to fill in the well. Well, they ended up collecting so many rocks that they were able to build a low water creek bridge out of the leftovers.

Before they could read, she would play read-along records with the grandkids, and then when they were older she would read with them in order to encourage a love of reading.

10 An excellent wife who can find? She is far more precious than jewels.

17 She dresses herself with strength and makes her arms strong.

25 Strength and dignity are her clothing, and she laughs at the time to come.

26 She opens her mouth with wisdom, and the teaching of kindness is on her tongue.

27 She looks well to the ways of her household and does not eat the bread of idleness.

28 Her children rise up and call her blessed; her husband also, and he praises her:

29 “Many women have done excellently, but you surpass them all.”

30 Charm is deceitful, and beauty is vain, but a woman who fears the LORD is to be praised.

Irene was a hard worker, hospitable, loving, selfless, encouraging (encouraging Mark to get back out to drive after a terrible wreck, would have him drive her around), hopeful, proud of her family, kept a nice-tidy house, always made her bed even if she made it to the kitchen and thought she had forgotten to make the bed she would return to the bedroom just to make sure, she was always ready to host, she was compassionate, and would make you feel special, like you were the only one in the room, she didn’t talk about herself much at all, she always wanted to know what you were doing and how you were doing.

A great legacy of faith 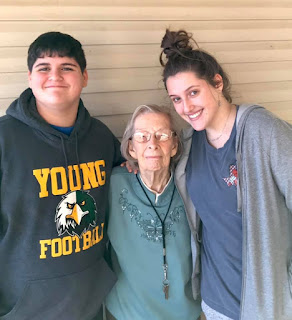 1 “Let not your hearts be troubled. Believe in God; believe also in me. 2 In my Father’s house are many rooms. If it were not so, would I have told you that I go to prepare a place for you? 3 And if I go and prepare a place for you, I will come again and will take you to myself, that where I am you may be also. 4 And you know the way to where I am going.” 5 Thomas said to him, “Lord, we do not know where you are going. How can we know the way?” 6 Jesus said to him, “I am the way, and the truth, and the life. No one comes to the Father except through me.

8 For by grace you have been saved through faith. And this is not your own doing; it is the gift of God, 9 not a result of works, so that no one may boast. 10 For we are his workmanship, created in Christ Jesus for good works, which God prepared beforehand, that we should walk in them.

My mom asked Kirstyn and James to sing In the Garden at the service.  It is the same hymn that Granny Rene had chosen many years ago for her mother's funeral so it seemed like a good choice.  They learned it last minute and did a really good job.  She would have been so proud of them.