Where in the World is Vitznau?

Okay, so I promised to share the story of how David proposed. I decided to take pictures of the scrapbook that I made while we were dating. I so wish I had a 12X12 scanner. Oh well...

Remember how I mentioned that David gave me a promise ring in December 1999. Well, one of the reasons he did that was because he was leaving in January to do a study abroad program through college for a semester. I was not thrilled to say the least but the ring made me a little happier. Anyway, he lived in Pau, France and traveled all over Europe for a semester and I made some really good grades that semester because he wasn't here distracting me!

For Spring Break I was able to fly to Paris and meet him there and travel with him and many of his friends all over Switzerland and France. I am so glad I did now because how many of my friends can say that they got engaged on Lake Luzern in Switzerland! How romantic. 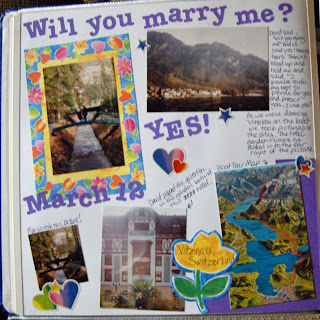 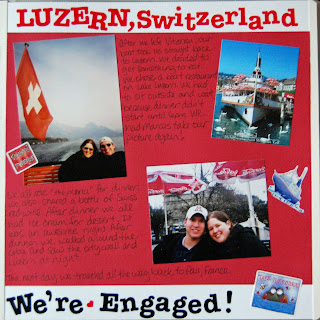 We were on the boat tour on the lake and we got off in Vitznau to go on a walk and check out some of the shops. We were walking in a gorgeous garden behind a 5 star hotel when David asked his friend Marcus to go down to the next bridge and take a few pictures of us. Marcus took one of us standing together and then David yelled down to him to wait and take one more. Then, David got down on one knee! I don't even remember what all he said because I was immediately crying and saying YES!

I keep telling him that one of these days he will have to take me back to that 5 star hotel to stay because I don't plan to go back to Europe and stay in hostels again!

So, there you have it. I got engaged in Vitznau, Switzerland during Spring Break.

So tell me, when and where did your man propose?

Pls visit my blog at:
www.dalvindoorlando.blogspot.com
thank you so much

I love this story, and you even have a picture to go with it. I would love to go to Switzerland, it looks beautiful.

I'm learning so much about you guys this week! What a wonderful engagement story.

Ours isn't nearly as exotic. My appartment in Dallas, rose petals, down on one knee, dinner cooked for me, champagne, ring. You get the jist! : )

How romantic! You have a great engagement story. I had a terrible cold the night my husband proposed. I was really happy and excited, but so miserably sick I don't think he quite got the big reaction he was expecting. Poor guy!

My Dad's house on Christmas morning...after torturing me with the thought that he didn't get me a ring for Christmas all morning long.

I will be posting about this tomorrow!

Umm, my man's never going to live down the fact that he naver gave me a romantic proposal!

Popping over from SITS, you were ahead of me on roll call! I am so jealous that you have been overseas! I want to go to Italy sooooo bad, I am hoping that maybe for my 10 year anniversary my hubby will take me! We totally don't have a romantic proposal...it was over the phone,lol, long story! Maybe I will be inspired to write a post about it! I for sure need to scrap book it!

How fun! That is a very cool story. My husband proposed to me while we were out to dinner with my Mom. :-)

I hope you get to that 5 star hotel too!!

We got engaged outside the same place we ended up getting married a few months later. He knew I wanted to get married there so it totally fit. :)

Wow, I don't know that many of us have a story that would measure up to yours! Great story.

That is awesome! I've never even been to Europe, and to be proposed to there would be sweet!

My hubby proposed one day when I went to visit him when he was sick. That's right, he was sick in bed and asked me to marry him... and I still said yes.

Just wanted to say thanks for stopping by my blog! I'll be back later (when my kids aren't being crazy..lol) and read all your stories. Can't wait!!

That is sooo sweet! I hope your hubs takes you up on that offer of staying at the 5 star hotel.. talk about going back down memory lane!

We got engaged at the Fort Worth Water Gardens... of course I was only 17 and he was only 20... we knew we belonged together very young!

What a great story!! Love it, and how cool that you got engaged in Europe. I got engaged on a beach here in the middle of winter! But it was the year we actually had no snow....he wrote it in the sand on Dec 30, 1996.