Okay, so I know I am running about 24 hours late with this post but I have a good excuse. Promise.
Yesterday after my workout David called and said he wanted me to hurry up and shower and bring the kids over to the office. Just after lunch when we arrived, Kirstyn and I found out we had an appointment at the salon to get manicures and pedicures...an early valentines surprise. He had the playpen set up in the playroom at the office so that James could take his nap while we were off being pampered.
Anyway, if you are following me on twitter, you already know that I lost 1.8 yesterday! Finally, I get to report a loss! 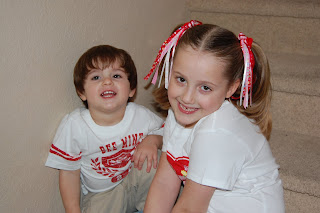 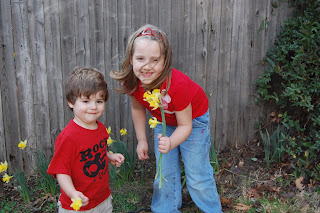 Happy Valentines Day to you! And look... the kids picked some of my flowers from the yard just for you!
P.S. Don't forget... I love comments ALMOST as much as I love chocolate and the comments are calorie free!

Congratulations on 1.8lb- that's awesome! I need to get back in the gym, I'm gaining like crazy :(
And what a sweet hubby you have too! Very thoughtful.
Hope y'all have a Happy Valentine's Day!

How sweet of your hubby! And WTG on the weight loss!

gurl you are rockin the weight loss...KUDOS!

Yay for the weight loss & the manicures! Happy Valentines!

ACK! I didn't remember to follow you on Twitter after I added you as a follower, bad friend, bad friend!

YAY for the loss! You are back on track and going full steam ahead.

Oh and I know you already know this but that David? He's a keeper! What a great husband and daddy!

What a man you've got! Too sweet. Congrats on a great report!

YAY congrats on your loss!! And, what an awesome surprise from your hubby!

Congratulations on the weight loss!

Congrats on the loss! I went back today after not having gone to WW since 1/9.
I stayed exactly the same. Not great but better than a gain.