A couple of weeks ago, Kirstyn's Pre-K class had an Occupation Parade so I thought that I would share 13 of the future careers sought by Kirstyn and her classmates. 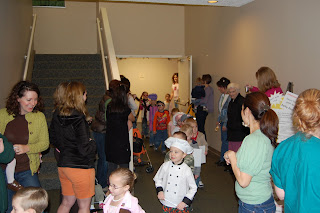 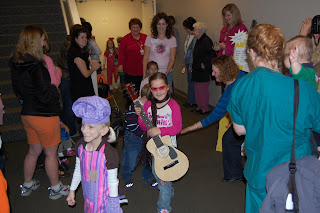 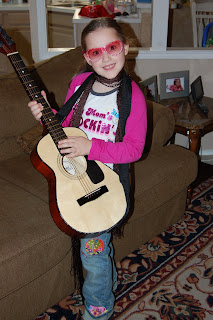 Don't worry though.... at least James won't have to live at home forever, Kirstyn says he is going to be a dentist because he likes to stick his fingers in people's mouths!

Oh and we tried to get her to dress up as an insurance agent. She has a Farmer's Insurance polo, dress pants, official name tag with her name on it and she could carry a file folder and pen. Kirstyn's response....this parade is for what we DREAM we want to be when we grow up... I KNOW I can sell insurance. Well, in that case sister, I hope you get to be a rock star but I am thankful you have a backup plan!

My son wanted to drive diggers, bulldozers,cranes--stuff like that and be a heavy machine operator. Grin. Happy TT!

I wonder how many will actually become what they say they want to be.

My boys all want to be something on that list...I just want them to have a job!

I love Trinity in that one pic too with her "Chef" outfit! : )

This is so cute. My daughter wants to be a rock star too. HA!!! There is a rock song called "Rockstar" I can't think of who sings it but she loves it. I try to discourage her from wanting to listen to it though b/c it talks about how the "girls are easy and the drugs come cheap". I am just hoping she doesn't really know what that means but she just likes the beat of the song. I am going to have to get different music in my car for sure. But she just loves it and wants to listen to it everytime we get in the car. Ugh, what have I done. HA

I LOVE what the kids come up with.

last night buggy and I were watching Idol and she was asking why they had to hold the mic.

After explaining, she said, she wouldn't use the mic she would use the headpiece mic.

I just looked at her and said, that's cause you are a superstar. ;)

I just love kids! This is a great list!

What a great post. My daughter is nine and is set on #2. Has been since she was five.

What a great day for the kids!

No one wants to be president?

Kirstyn is a smartie! I love that she knew the difference between a dream job and what she knows she can be. That looked like a fun day at school for the kids!