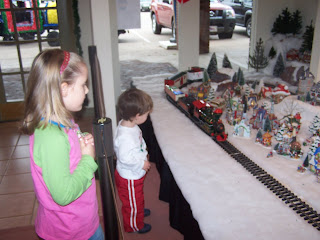 I decided to go ahead and take James and Kirstyn by to see our favorite Santa. I love this Santa because they let you take pictures with your own camera in exchange for a donation to A Wish With Wings (a local children's charity). While we waited on the one child ahead of us to finish talking with Santa, James and Kirstyn enjoyed checking out their train display. Kirstyn was very excited about talking with Santa. She told me that she wanted to make sure that he knew that she had been good because she didn't want to be crossed off of his list. She also wanted to make sure that he knew that she would really love to have the Barbie laptop that she saw at Sam's and a new wiener dog Webkinz. I am loving this time of year combined with her age. Now, if she isn't listening, all I have to say is, "don't forget that Santa is watching..." and she immediately becomes my little angel again! 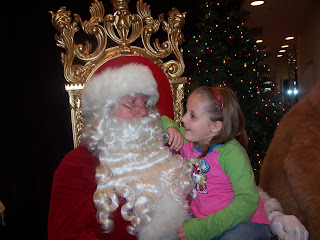 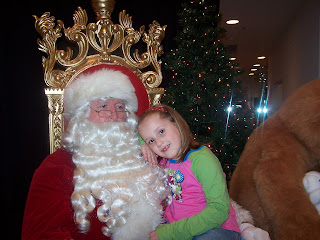 After Santa and Kirstyn had talked for several minutes, I decided to put James up there with her to try to get a cute picture. ummmm... no such luck. James was pointing and saying 'Anta'... 'look! anta'. However he apparently just wanted to look at Santa, not sit on his lap. What really cracks me up is that James having his major fit didn't even cause Kirstyn to stop smiling! 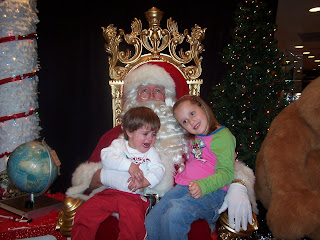 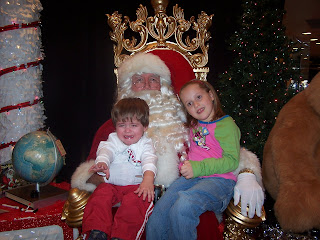 Well, like I said.... this Santa is the BEST Santa! This Santa always has a little gift to give the children that come to see him that his elves have made. This year they were fabulous little wooden cars. Check it out. The elf gave it to James and he was so focused on his new little car that he didn't even really realize that I had put him back in Santa's lap. They were playing with the car together while the elf, Kirstyn, Mrs. Clause, and I all yell James' name to get him to look up. I had just enough time to snap this one picture before James realized that he was once again in Santa's lap! 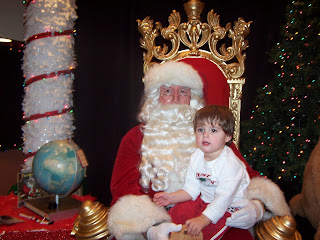 If we have another free afternoon we might try again...
Happy Wordful Wednesday!

Lacey in the Sky said...

It's just not a good Santa picture unless someone looks terrified! Poor Santa... he must have horrible self-esteem at the end of the day!

Kirstyn looks so cute snuggled up with Santa, but my fav is of James screaming. I love a good crying on Santas lap picture! :)

I love that guy in red! In fact I have hundreds of him all over my house this time of year!

Adorable photos. Gotta say this kinda Wednesday just melts the heart, doesn't it? Thanks for sharing....

Come see my Wordful Wednesday if you can find time!! It's a catghan!

What a great Santa! We also have a place like that, and I love it! Love your pictures!

Hint to Santa - do NOT give Kirstyn that Barbie laptop. It will drive her Mommy c.r.a.z.y! At least, it will if its the same one N got for her birthday.

Yup, Santa is one scary dude. Why does he need all that facial hair to cover up anyway? And what kind of man walks around in red jammies. I'm with James on this one.

Love this post! What a great idea that you can get your own photo in exchange for a donation to a worthy charity! That is the kind of Santa that is worthwhile! And I love that he focused so much on the car that he didn't even realize he was in the Big Guy's lap again! So cute!

Another classic Christmas picture. I think these are the best kinds. I have several of my kids screaming too. Merry Christmas!

The crying Santa pictures are soooo cute. I have some of my boys like that, too!

Awww. I was totally traumatized by the whole Santa thing and I bit him when I was two. So I totally empathize with the kids and wonder why we torture them so. Poor James. But hey - look - great blackmail pictures for later in life! ;) LOL.

Looks like James may not like Santa any more than Kamden does! Those pictures are adorable though :)