Kirstyn's dance team participated in Arlington's Parade of Lights on Saturday night. Kirstyn was very excited to get to be in a parade! And since it was a Parade of Lights she got to hold her very own flashing lights while riding on the float! 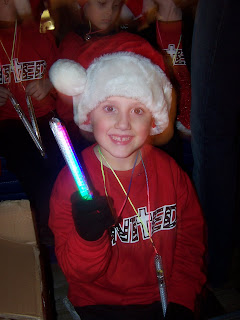 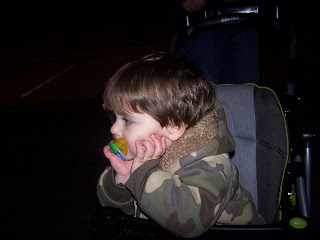 When we got there she was very excited to be in the parade but a little sad that she wasn't going to get to watch the parade. Not to worry, James watched everything very close!

We did get to walk around and see all of the floats while we looked for her float so she thought that was pretty neat. There were horses, dogs in Santa hats, High School bands, and even Captain the Texas Rangers mascot. 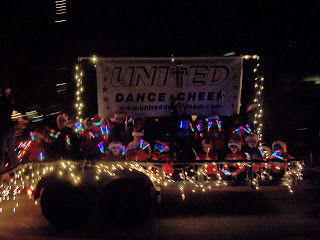 We were waiting for her to come by toward the end of the parade route and by the time she came by us, it had been about an hour since the start of the parade. She seemed very excited to finally be seeing us. The girls were all singing along with the music and playing with their lights on the float. The older girls were marching behind the float with a light in each hand performing a routine. (I tried to take a picture of it because it looked really cool but it didn't turn out). They all did a great job! And well, we now have a celebrity in our house that was in a REAL parade!

Oh and a few weeks ago, Kirstyn danced on a REAL stage at Holiday Magic!


I am so proud of how brave she has been getting on a stage in front of lots and lots of people and then being in a parade after dark. She is really growing up and I am very proud of her! We really do have our very own little star at our house!

That video is the CUTEST thing ever! I'm so glad you posted it- I needed something to make me smile today (only 8am and it's already been a long day) And what a great picture of James watching the parade- too funny!

Yay Kirstyn! I saw her float and looked for her, but couldn't pick her out from where we were at.

Is K #2 in the back row in the video? So cute! I secretly hope N expresses an interest in dance, as it's just so stinkin cute.

That is so sweet! I want to have a little girl so badly! Ah well... maybe the next time!

That was very brave of her to be gone from you that whole time riding on a float in front of all of those people! I'm sure she will remember it for a long time.

I can still remember being in a parade with my sisters when I was 4!

I love watching little girls dance. I have to say, it does remind me of my dancing days!

Great job at the parade too!

That video was so cute! And I have to know, was K the 2nd one in on the back row? I was thinking that was her the whole time.

Yay for Kirstyn! And that picture of James is adorable, he was really into it :)

Awww, she did wonderfully. You deserve a little pride in that young lady! :)