Are you watching the new television show called SWAT?  One of the characters, Deacon, told one of their newer team members that in order to do a stressful job like the one they do, he needed a chair.  Early in his career he was thankful someone had told him if he wanted to keep his job and his family in tact he needed to find himself a chair.  He went on to explain that your chair could be anything or anywhere that allowed you to decompress after a stressful day as long as it was safe for you and everyone else. His mentors' way of winding down was his favorite chair and a smooth whiskey.  My brain kept spinning... a good book and a soft blanket, going on a long run, a silly game on your phone, playing basketball in your driveway... but he went on to say, the sooner you figure it out, the healthier you and your relationships will be and its up to you to figure it out.  He told his friend he just needed to hurry and find his chair before he found himself in a place where it's hard to come back.

I personally used to really like to get lost in a good fiction book or even a series of books, but since my first seizures and brain surgery my eyes have not allowed me to read like that anymore.  I've found that I can find that same escape in television and movies and even audio books.  I'm always listening for quotes and conversations among the characters that challenge me or make me think about things differently.  I then try to bring these challenges back to the Word and ultimately see my faith grow.  George R. R. Martin said, "All fiction has to have a certain amount of truth in it to be powerful." 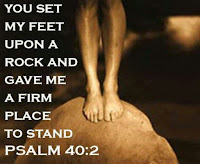 Later in the show we see Deacon in the waiting room of the hospital waiting on his wife to get out of brain surgery and he is beyond stressed.  He tells his friend that after 10 years on the job, he's in a place he doesn't know how to cope because when he comes home every night from work, his "chair" is his wife Annie's embrace.  He is at a loss for how to handle this stressful situation, how to decompress, or even how to re-center himself.  I hurt watching the stress on his face because I have seen a similar look on my own husband's face.  Your spouse's arms should absolutely be your "chair" at times. It should be a safe place to decompress, and a hug from them should be a way to feel the stress of today melt away.  But as I watched him pace around that waiting room, I wanted to read scripture to him.  I wanted him to hear the words of the song... When darkness veils His lovely face, I rest on His unchanging Grace; In every high and stormy gale, My anchor holds within the veil.  On Christ the solid rock I stand, all other ground is sinking sand.

So, I want to ask you, do you have a chair?  More importantly... is that chair sitting on THE ROCK?

Hey, great blog, but I don’t understand how to add your site in my rss reader. Can you Help me please? EAMES EXECUTIVE ES104 OFFICE CHAIR