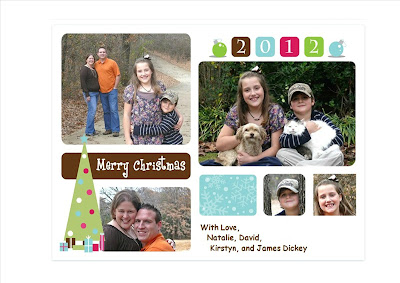 So when David and I got married, I really wanted to make sure that I took the time to write a Christmas update letter each and every year.  Guess I had a misconception that it wasn’t a big deal and I would be able to always follow through with my plan.  I know I wrote my last long update letter in 2008 and then in 2009, I put together a Christmas postcard with a brief update to save on postage.  But, in 2010 we made the difficult decision to sale our Farmers Insurance Agency to David’s mom and he was officially unemployed and looking for work in a tough economy.  And since postage, Christmas cards and a fun letter wasn’t a necessity I wallowed in my bad mood and opted out of one of my favorite Christmas traditions.  In January 2011, David started a new job at Sewell as a Service Manager with their Fort Worth Lexus Dealership and was really enjoying his new career.  In June 2011, I was diagnosed with a malignant brain cancer – Oligoastrocytoma.  Before even having time to process this devastating diagnosis, I began an aggressive treatment schedule of both radiation and chemo!  The seizures that I had in my sleep that required David to do CPR, and that ultimately lead to that terrifying cancer discovery, forced me to be without a driver’s license for 6 months.  Kirstyn had to attend before- and after-school daycare and James was able to continue to attend his private pre-school.  We had lots of amazing friends that stepped up and helped with transporting all 3 of us while David was working.  When the medical hold on my driving was lifted in mid December 2011, I had people to see, kids to entertain, and tons of errands to run, but no time (or the correct frame of mind) to sit down and write a Merry Christmas letter!  Oh – and in December of last year David transferred within Sewell to work as a Sales Associate at their new Fort Worth Infiniti dealership.


So, here I am at the end of 2012 (NOW, beginning of 2013!  Maybe I will get this out before I need to label it Happy Easter!).  I have a new appreciation of each and every day.  We are being more proactive in teaching our children that ‘stuff’ is not what is important and that life isn’t ever going to be fair, but we serve a God that loves us in spite of us.  I love quotes and I think the one that fits our family this year is by the character Thomas Hunter in Ted Dekker’s Circle Trilogy, “Most men and women will yield to the seas of ruin.  Only the strongest in mind and spirit will swim against that current.”  We are trying very hard to make that a practical and daily process.  For Christmas this year our kids asked us to participate with our church in making an eternal impact in Haiti.  We are sponsoring a 7 year old boy named Woodley through New Missions.  We have his picture on our mantle and we are praying that he will grow into a man of God that will one day be a leader in the Church that our home church is partnering to build in the coming years.


For James’ 5th Birthday in May he asked all of his friends to not bring him presents but to instead bring hats for him to donate to kids with cancer.  Since he rarely takes off his own hat, he thought it was a great idea to make sure all kids, especially ones that might loose their hair, have a special hat!  We also spent much time in the spring praying about whether or not to do another year of pre-k classes or allow him to start kindergarten as one of the youngest in his class.  We decided it would be best for all of us if he returned to his pre-k at Fielder Road Baptist Church.  We did decide to switch him from 2 days a week to their 3 day per week program so he could go more, and that schedule worked better with my monthly oncologist visits and weekly blood work appointments.  He has really grown and matured this year.  He is starting to read and is so very curious about everything.  His absolute favorite thing to do is play Mario games and read Nintendo magazines and websites to learn about more secrets in the Mario games.  I am constantly amazed by how fast he memorizes the tiny details in each game he masters.


Kirstyn began 3rd grade this fall.  She has fallen in love with Hula Hooping and can do some amazing tricks.  She also loves doing zumba and dancing and singing.  Sometimes she is able to combine all 4 of these activities into one!  She played volleyball through the YMCA this fall and really enjoyed it (great news since she is so tall and competitive… just have to work on the aggressive part a little.  Guess she will always be our princess.)  She also started taking piano lessons and has progressed like crazy.  Her teacher believes she is already ready to compete so we will be trying that out this spring.  For her 9th Birthday in November she asked her friends to come to her party and bring donations for the backpack food pantry at our church instead of presents.   This was her second year to donate to this ministry but this year we were able to go bigger by combining her party with her friend Thomas that is in both her class at school and church.  They collected 999 individual food items totaling over 260 pounds!  We made a short video testimonial for our Thanksgiving service at church that can be viewed here:  http://www.youtube.com/watch?v=bY38R2tFmdY


We stayed very busy this past summer.  In June, my mom and I took the kids on a road trip to TN to visit family.  We also went on our yearly vacation to Port Aransas where we spent a week with some of my dad’s family and mostly just relaxing and playing on the beach!  I was excited to get to actually swim in the ocean, something I look forward to every year!  (Vacation 2011, I still had staples in my skull and wasn’t allowed in the water.  Also, surgical staples can get very HOT in the summer Texas sun!)  The kids attended several day camps too.  Their favorite is Camp Thurman where they play outside and learn so much about Jesus.  Every afternoon they get in the car looking like the counselors dipped them in the lake and then drug them through the dirt all the way to the car but they are excited about scriptures they have learned, fears they have concurred, and friends they have made.


As far as my medical details go, I have had several stable MRI’s showing that the tumor that remains in my brain is not changing.  My most recent MRI was on Dec 31, 2012 so we ended the year with good news.  I will start Round 17 of Chemo pills on January 7th.  The current plan is to stop chemo after 18 rounds rather than the originally planned 24 rounds.  We don’t know all the details yet but we do know that we will continue to monitor my cancer with regular blood work and MRI’s and I will continue to take massive doses of seizure medication.  Most importantly we covet your continued prayers for all of us to be at peace with His will as we continue to make the most of each and every day that God allows us to have together.


"Because she loves me," says the Lord, "I will rescue her; I will protect her, for she acknowledges my name. She will call on me, and I will answer her; I will be with her in trouble, I will deliver her and honor her. With long life I will satisfy her and show her my salvation." (Psalm 91:14-16 NIV)