April 2012 has proven to be a major Whirlwind for our family for MANY reasons.
Here in Arlington we started the month off with a major Tornado.  The 4 of us at the time of the storm were all in different locations and all in the path of destruction.  We were all a little emotional and shook up but safe and sound and that was the most important.  I waited the storm out in the walk-in at our Fuzzy's Taco shop with a good friend and several strangers that won't soon forget me.  Kirstyn was in duck and cover position at her elementary that was only a block from some very major damage.  She told me the next day, "Mommy, I know we are just supposed to pray inside our heads at school, but yesterday when the building was shaking, I was crying and praying out loud!"  James was at his pre-school where they took all the kids into the designated shelter to play games... he had no idea that there was even a storm.  David was in Dallas at a training class and his cell phone calls to me were not coming through, he just knew several tornadoes had been reported in Arlington so when we finally got in touch I already had both kids and we all made it home safe with only minor damages compared to many of our friends.  (Hail damage on our vehicles, new roof has already been put on the house, new bedroom windows, and still working on picking out new garage door... details really overwhelm me now but we are using an awesome contractor and David is taking care of everything that reguires financial decisions.)

Our friend, Chris took these amazing pictures for our Easter Card.  I love these words to an old hymn we used to always sing in church for Easter Sunday and this year they are so true for our family! 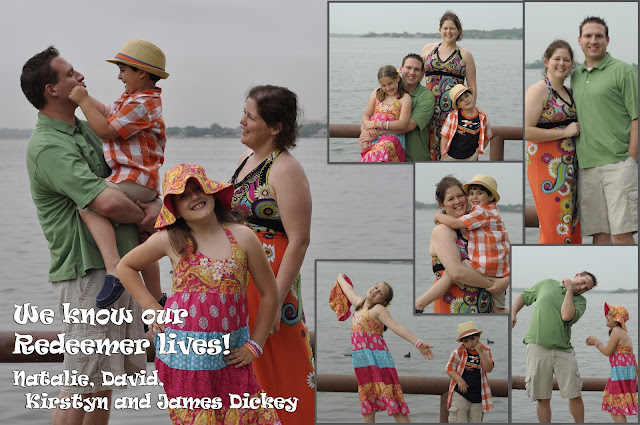 David and I went on TWO dates.  That might be a record for one month!  We went to a Ranger game with my college roommate Angela and several of her friends and then we got to go to the Bass Hall to see the Ricky Nelson Remembered concert.  I was feeling like I had won the Date Night Lottery. 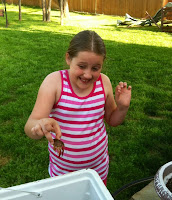 We made lots and lots of fun memories!  We went to a friend's house for a Crawfish Boil and Kirstyn had so much fun playing with her food.  James wanted nothing to do with the little critters and made it very clear that he didn't want food with eyeballs on his plate!  I enjoyed visiting with several friends from back in our college days.  David ended up at work late but there was still plenty of food when he finally made it over!  YUM! 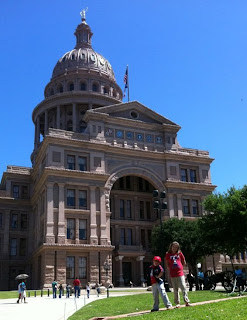 David had his best month so far since he started selling for Sewell Infinity of Fort Worth. He was very busy and we are all very proud of his hard work... God is so good!  When he needed to deliver a car to a customer in Austin, the kids and I packed a bag and met him down there and enjoyed a Sunday of site seeing and eating!  We had so much fun touring the capitol building and visitor center.  Both of the kids have been learning Texas history in school so they were so excited to be recognizing things all over the grounds and in the buildings.  On our way home we were able to stop by and have Blue Bell Tin Roof Sundae ice cream with my Uncle Johnny. 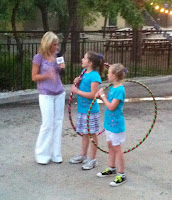 I took Kirstyn to an event called "Spin Out Autism" and we took along friends of ours.  Kirstyn and Gracie were interviewed by Chevy Hometown Kids and should be appearing on cable on Saturday morning very soon.  We were unable to hear anything the girls were saying so I'm nervous excited to hear what all they said about why they were there Hooping and supporting a cause that helps kids with Autism.  We were all wearing blue shirts in support too!

I was asked to start teaching a regular Body Pump class at a local gym on Monday mornings at 5:30 am and if you know me, you already know that I said yes!  Prayers appreciated because I'm nervous about how that will work during my monthly chemo weeks. 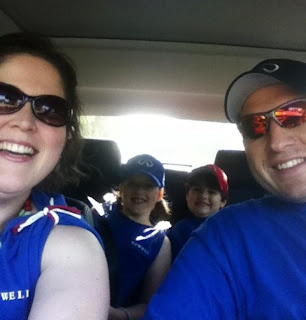 David's company had a huge summer picnic at the Texas Rangers game.  We were all given t-shirts to wear and had a great time going to the game as a family!  Kirstyn decided that our shirts needed some help to look like 'girl' shirts.  We even sprayed her down with body glitter!  I think David said there were around 3,000 employees and family members that attended the game.  It was really fun to look all around the stadium and see huge sections of seats filled with blue Sewell shirts!  We were seated in sections with each of the dealerships so our family got the opportunity to get to know the families of the people David works with every day.  Kirstyn and James both made new friends that they can't wait to see again soon! 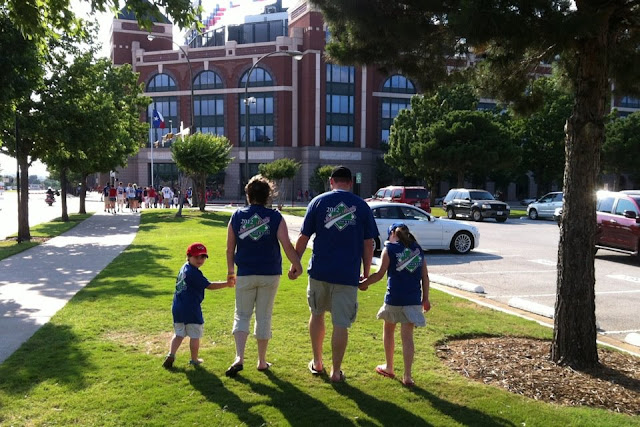 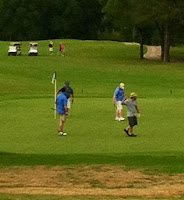 We finished the our crazy busy fun month of April at the Gregg Pearson Invitational golf tournament and dinner.  This foundation has been an amazing support for our family since my cancer diagnosis and we will forever be grateful.  David and my Dad played on a team with two of our good friends and they had a very good time!  The kids had a blast playing in the bounce houses and Kirstyn got her face painted.  I got to meet several people that have been praying for me and mailing me encouraging cards for almost a year now.  It was so nice to put faces with these names that are so special to us.  I was also featured as one of their "Fighters In Focus" and for that I was humbled and honored.

All that in the midst of our day to day activities and I completed Round 8 of chemo.  My next oncologist visit and MRI is scheduled for May 15th.  Round 9 of chemo is scheduled to start on May 20th.  This blog actually feels very "normal"...  we are working very hard to minimize the power that the cancer has in our lives and we really appreciate all of your prayers and encouragement!

What a really brave pair of people you are.. I take my hat off to you, so much to do with the little ones, and trying to keep it all under control.. there must be times when you think, why me? but I guess and am sure that your faith will help you fight this!!!.. Good luck with the next session of chemo... hugs from across the pond.J

Thanks for the wonderful update! Your Easter pictures are fabulous. You look like you were having a great time! I hope that your health continues to improve, and that you're able to hold onto that can-do attitude. What a gift!

Yay for a "normal" post! (My phone won't let me text you for some reason,btw... been thinkin about you though!)