Focused.... on everything else.


I have to say that I have been missing all of my friends here in blog land! I haven't posted in a while and even worse, I am something like 575 posts behind in my google reader! 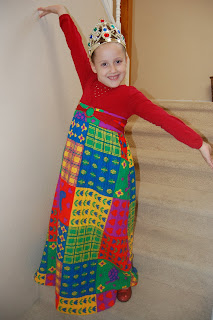 Last week was pretty crazy as we wrapped up Kirstyn's final days in Pre-K. I can't believe I am going to be a Kindergarten momma... how did that happen so fast?!?!?


Here is a picture of her dressed up for their Letter Parade. Kirstyn was thrilled to be going to school dressed as Quilla the Queen. We borrowed her skirt from my grandmother and found the cute crown at a local costume shop.

Other friends were Daisy the Doll and Zippy the Zebra...a very cute and a clever tradition from her preschool. James will be enrolled there in the fall so we will still be doing lots of fun things like this as long as the little mister will play along!

This week Kirstyn is in Arkansas taking swimming lessons and spending some quality time on the farm with my mom and dad. While she is there I have been enjoying lots of one on one time with James.


We had friends over the other night that have a little boy just a few months older than James and it was so much fun to see him experience a play date with HIS friend without his usual big sister supervision. It was too cute to see them running around and giggling non-stop. They were so busy they could barely stop long enough to shove a bite of food in their m 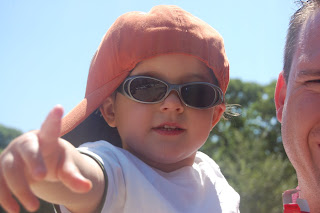 ouths and take off running and playing again. Finally they both sat down and ate a few bites because we taunted them with the promise of some yummy black bean brownies!

David and I have been watching 24. We have a tradition of recording the entire season and then watching it all together all at once. The very first season we watched one hour at a time with everyone else but we think it is much more exciting to watch it together as fast as possible. I can't wait to finish it so that I can get some more sleep! That is my main reason for being away from the computer. He isn't working upstairs in his office so I am not booting my laptop. We have enjoyed the time together curled up watching Jack Bower try to save the world!


Keep checking in on me. I am still working out and eating very clean. Inches are coming off but the pounds haven't changed in the last couple of weeks. I have several posts on clean eating and exercise that are swimming around in my head. I hope to catch them and get them out on the blog in the very near future.... but until then it's 'Bauer Time'!


What have you been doing the last few weeks? What would I be missing if I give up on playing catch up and just mark all as read in my reader?

Well, no I'm not into 24 but I've decided to finally jump on the bandwagon and I just started watching past episodes of Lost. It's pretty good so far!

And, where did you decide you would be sending Kirstyn for Kindergarten?

Mark All as Read!!!! I've had to do that a few times and it is very freeing!

I was wondering where you were!
I watched the first season of 24 and that was it...love Keifer, but reality TV seems to take priority...lame I know!
Good work on sticking to your diet and exercise! The more you work out the more muscle you add...means the scale may not move.. go by how your clothes fit!

I am behind too, can you tell? I can't wait to read your posts on eating clean...I am trying to clean up my eating it had gotten out of hand and I was feeling draggy and icky. It matters what you put into your body!!

My hubby and I record a couple of shows, but we definitely don't get time with two little ones to watch the whole season at once!

That must be fun! Enjoy.