Kirstyn's debut performance was Saturday night at her first official dance recital in front of LOTS of people! She did amazing and looked very pretty and much too grown up! Her height was even more obvious when she was on stage with her peers. Yes, my 5 "AND A HALF" year old daughter is 48 inches tall! Anyway, she did a great job and she can't wait for the DVD of the recital to come in so that she can watch it "over and over"! 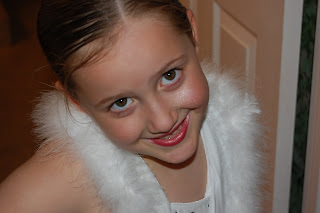 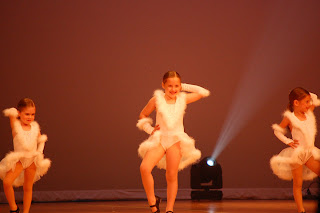 I joked on Facebook about how putting on a little makeup and pink lipstick made her walk rather sassy and about how it seemed to scare her father to death! It was pretty funny.

Her daddy really does love her so much. See, I have proof! He agreed to and participated in the finale at the Dance Recital... their "traditional" Daddy Daughter Dance! This year's theme was DISCO! Kirstyn was so proud of herself and her daddy for putting on such a great show! 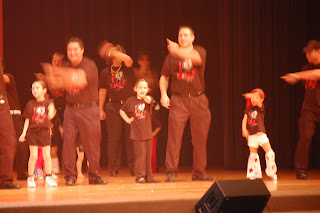 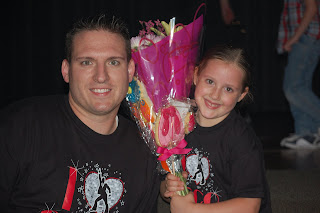 You can't tell from this picture but Kirstyn performed in only one shoe! See, they ran in on the isles for this performance and the daddy behind her stepped on the back of her shoe and she lost it. She was so proud of herself that she didn't stop or worry about it! When the dance was over she said to David, "Daddy, I need to go over there and get my shoe." David asked her why she didn't get it when she lost it and she said, "because they told us even if something goes wrong with our costumes, like if a feather falls off, then just keep going and no one will know until we tell them and then they will think we are a REAL star since that didn't even matter!"

We couldn't be prouder of her! And yes, she is a REAL STAR!

Oh and I have to share this one last Kirstyn funny...
I have been asking her now for two months if she wants to take dance next year and she has been adamant that no she did not want to do dance anymore. Finally, on the way home from recital I got to the bottom of it. I said, "Kirstyn you were really good tonight, don't you want to keep taking dance?" She said, "No Mommy, didn't you see that I am really good at Broadway Baby? I don't want to practice that dance anymore." Ha. Poor kid thought that if she took dance again that she would just keep doing that same routine over and over! When we explained to her that she would get to learn one of the other "big girl" dances she was over the top excited! So, I guess we will be taking dance again next year!!!

This is definitely a WordFUL Wednesday!

She really is a super star : ). So pretty and WAY to go ignoring the shoe fiasco! That is impressive!

I am six feet tall so I can relate to being the tallest kid on stage. Your Broadway baby is adorable......all 48 inches of her. :)

Great pictures! She is adorable!

How adorable and what a rising star! Wow! Good for her dancing without her shoe on... so 'grown-up" for such a little girl :)

I am Harriet said...

Yeah, she definitely has better memories of her first recital than I do of mine.... I fell on my tushy and was crushed when everyone laughed at me, although my mom said they were laughing because I was so cute, I never believed her. ; )

Yay Kristen! She sure is a star. That is awesome. And so cool that David got up there and danced with her!

She totally looks so mature for 5 1/2. I don't mean that in a bad way..not at all. I mean, she looks so grown up. Okay, that doesn't make sense either! LOL

Wow, she looks like she really enjoyed performing, she's got confidence that shines through in the photos! And what a trooper about the shoe, she really is a star!

So cute that she thought she would have to do hte same routine again, I love kids logic:)

How cute! She is definitely a real star. :)