Since James was born, going to the Ranger games has gone from being a family outing to being a date night for Kirstyn and Daddy. It makes me happy that Kirstyn loves the Rangers as much as her Daddy does. She also really enjoys going to the games and cheering for HER team! A month or so ago, David took the afternoon off and we took both kids to the last game of the season. James did a really great job staying in our seats and clapping for the Rangers. Here are a couple of pictures from our afternoon together. 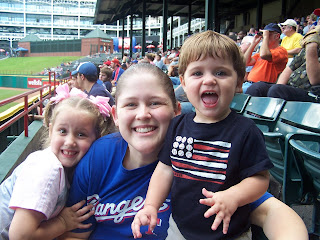 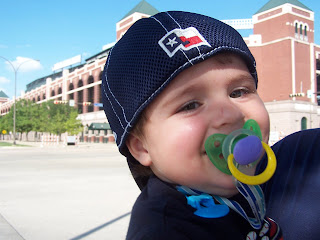 Oh, speaking of baseball... David took Kirstyn to the Ranger game when the Rangers were playing the Red Sox. When Kirstyn came home she was nearly in tears talking about how there were lots and lots of people there that were cheering for the wrong team. She just couldn't imagine why or how these people were cheering for a team other than HER Rangers. She was just sure that Michael Young's feelings were hurt because there were so many people that were not cheering for him. She is so genuine. She really does commit 100% to her friends and she considers each and every one of the Ranger's players her friends because she knows their names and she cheers for them. So... next season, if you are at the Ranger ballpark... PLEASE join Kirstyn and cheer on the Rangers!

What a great common interest for your family!

Great shots and such a nice event for them to participate in. Sorry, can't root for the Rangers. Darn it. OK. I can do it for Krysten because she is adorable!

I would cheer for them JUST for her! That's incredibly sweet. I wish all fans were than enthusiastic and loyal.

HOW SWEET, baseball is a great family activity!

HOW SWEET, baseball is a great family activity!

This is awesome! Kirstyn is so adorable and loving. And James looks too cute! i hope we can get our kids together someday soon!

Aw, I love that shot of the 3 of you! Such happiness:)